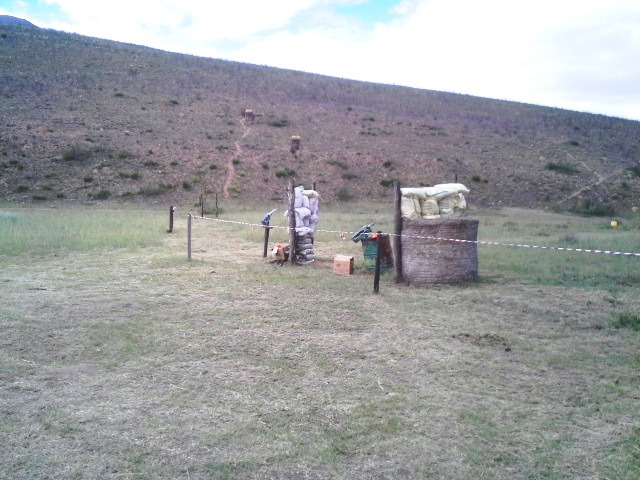 Thankfully after a very slow process the Greyton Gun Club is back up and running at full speed. The machines have been serviced and infrastructure rebuilt after it was completely wiped out in the 2016 fire.

This weekend’s shoot went very well and we were very pleased to see some old faces. Guy Emslie Honorary member put in an appearance an acquitted himself well after have been away for some years. In spite of his absence on the range this has not stopped him reliably supplying the club with bails. Unfortunately these are regularly savaged by rogue donkeys. This is in spite of them being treated old car oil. We also had visitors Manfred, Andre, Xandre and Hoffie.

Shooting conditions were near perfect with a temp of 22C overcast and virtually no wind all day. 24 pairs and two singles were shot over 8 very different stands. There was nothing particular far and you could get around comfortably with ¼ and ½. Some members last shot in November and paid the price on the easiest layouts making hard work out what can only be described as card fillers. Five months of nothing will do that to you. Even a couple of sessions on the PS3 would have helped.

We will shoot sporting doubles at the next shoot the 26th of May. There will be no April shoot on account of ESC holding an Autumn Sporting shoot at Nidderdale Farm on the 21st in the Hemel and Aarde Valley. The venue is situated just below Babylon’s Tower and looks out over two dams towards Hermanus. It is worth visiting just for the view. For more info visit Elgin Sporting Clays on FB or if you have already deleted your account contact Simon on 082 339 4998.

Just after the fire in November 2016

News weather, info and other need to know stuff about Greyton.
View all posts by greytontoday →
This entry was posted in Uncategorized. Bookmark the permalink.